Researchers from the Institute of Advanced Study in Science and Technology (IASST) in India have developed a smart bandage material based on graphene oxide that can heal wounds better and faster and has antimicrobial properties. 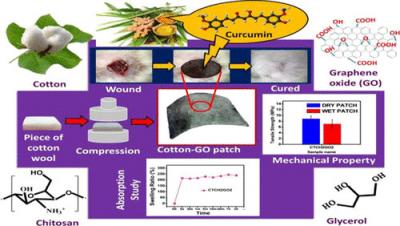 The bandage is made of cotton patch coated with chitosan-based hydogel that is loaded with curcumin and graphene oxide. The researchers used curcumin as a model drug but said it can be replaced with other antimicrobials.

“Cotton tends to stick to wounds and being fibrous it is difficult to remove it. By coating the cotton with chitosan and compressing the bandage we get a material with similar properties (porosity and ability to absorb water) as cotton but one that does not stick to the wound,” says Dr. Devasish Chowdhury from IASST and corresponding author.

The absorption capacity of the cotton patch can reportedly be utilized for loading nanomaterials and antimicrobials to impart wound-healing properties. The researchers used graphene oxide, since its antimicrobial properties and biocompatibility are already well documented. The nanosize of graphene oxide allows large amount of drug to be loaded on to the patch. Graphene oxide also increases the strength of the patch especially when it gets wet.

“Currently, there is no control over drug release. We are trying to address this by using different nanomaterials. We should first functionalisze the nanomaterial so that when the drug is loaded it attaches to the nanomaterial and gets released in a sustained manner,” Dr. Chowdhury says. “We must make sure that like graphene oxide, the chosen nanomaterial is biocompatible and does not get released into the wound.”